Hi All!  Today I'd love to share with you my garden.  This year I've been trying a bunch of new things and it's been exciting to see what is growing.

This year I tried a new technique with the garden.  Instead of just sewing rows of seeds, I hilled up rows to create a bit of raise bed effect. (I saw my neighbour do it and thought I give it a try myself) Thus far it's been great!  We hand water our garden and so it's working fine to keep it moist, but when we get a lot of rain (which we have this year) it doesn't sit on the plants but runs down into the furrows instead.
We planted a bunch of peas, carrots, spinach, lettuce, kale, beets, garlic, onions, chives and radishes in the garden plot this year.  Along with some marigolds, borage and calendula. 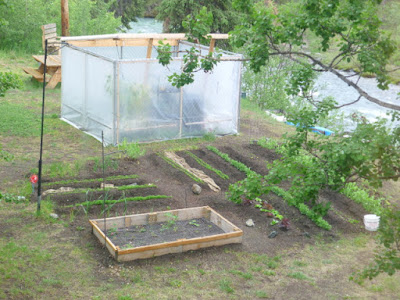 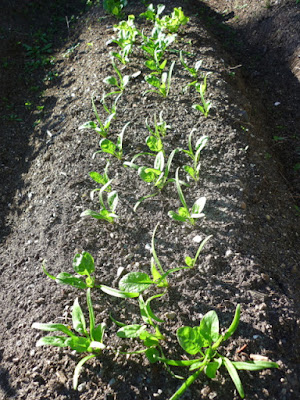 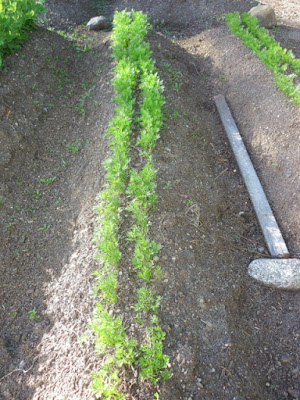 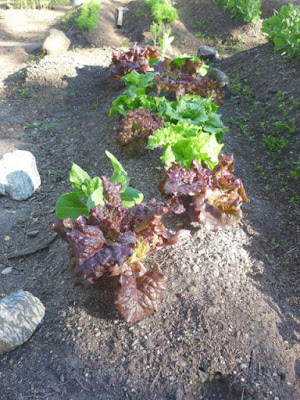 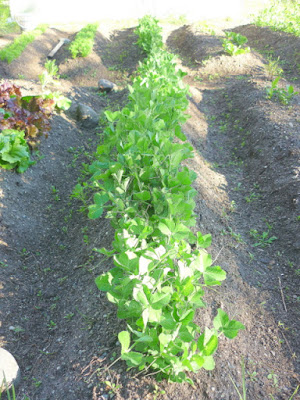 This  year we made a box around the strawberries with a chicken wire top to keep out the squirrels. (they've tried to get in and it's funny to watch them bouncing around on the wire until they give up.) Then we mulched it with straw so the berries will hopefully not be sitting on the soil once they start coming. 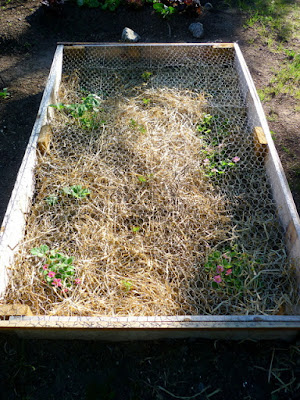 Then here is the river we live beside.  It's all brown and rushing as it's been raining a lot as of late.  Most of the time it's a beautiful green/ clear.  This is where we go down and get our water from for the garden.  Then when it's clear we also get the water for the house from it. 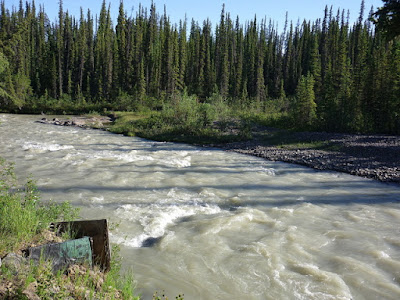 In the greenhouse we have tomatoes, spaghetti squash, zucchini, one pepper plant, cucumbers and some herbs and flowers.  This year we found and added a big black water barrel to the greenhouse to make compost tea in and also to use as a heat sink for the nights.  We don't have a way of heating our greenhouse at this time, so the water barrel helps to dispel the frost and chill.  (yes, I said frost, for it was frosting even up until a couple weeks ago here.) It still gets very cool at night sometimes, but the plants are still growing  nicely. 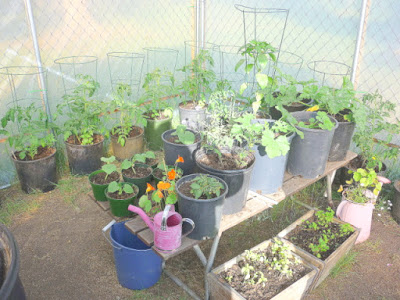 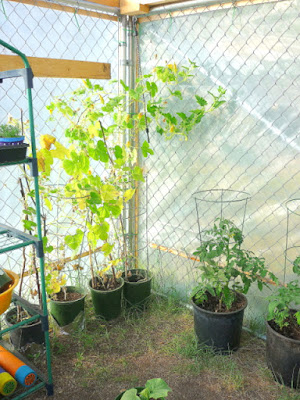 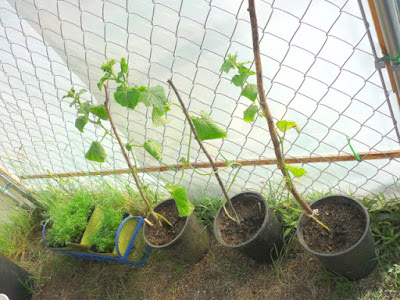 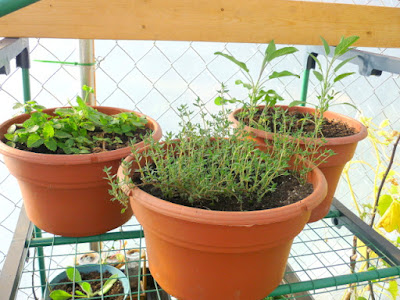 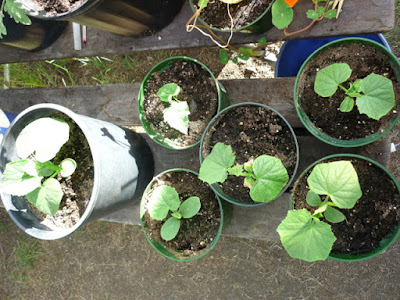 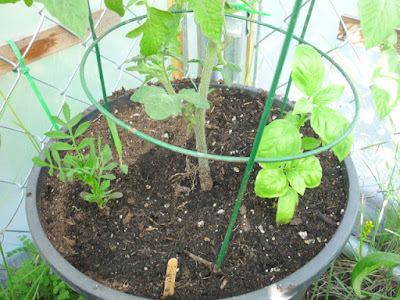 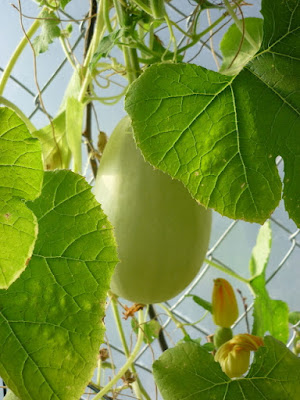 We also built some small raised beds to grow beans in.  Then we ended up with some sprouting blue potatoes so we tossed them in there also and they're growing well thus far.  We'll hill them with straw through the summer.  The beans are just starting to come up.  The first set didn't take or got frosted off.  The fava beans (which we've never grown before) are doing extremely well in the cooler damp weather.  They are surrounded by fireweed so there should be lots of pollinators around.  I've actually had to cut down a bunch of the fireweed for it was shading the beds too much.   I hope to try fireweed jelly later in the season. 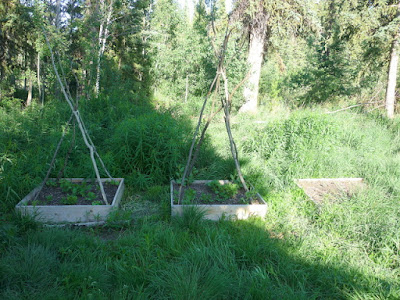 This year we have also added a few more flower barrels and pots around the yard.  We grew most of the flowers from seed also and it's exciting to see them flourishing. 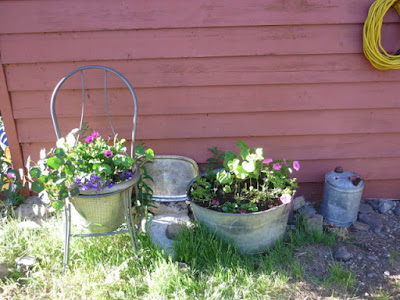 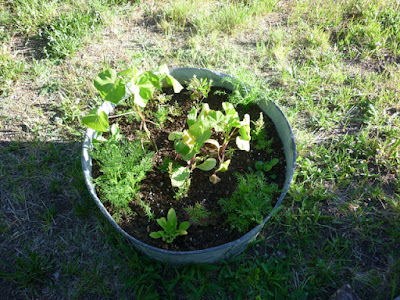 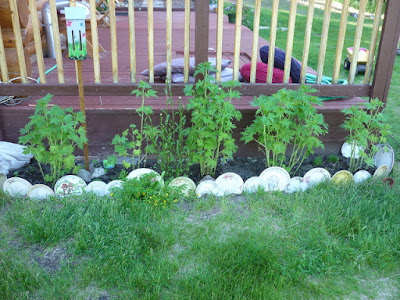 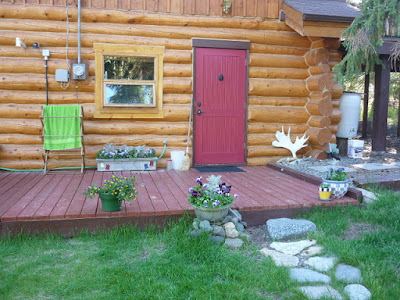 We have also been blessed with a gift of raspberry saplings.  We potted them up this year and will dig holes in the ground for the pots in a few days.  Then they can be moved if need be without being disturbed again.  We'll put them out by the rhubarb and see how they do there.  If they don't like that location we can easily move them somewhere else. 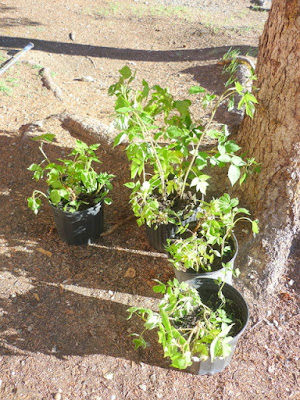 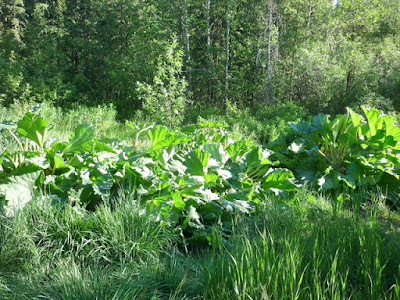 Last year we started some rosemary from seed, overwintered it in the house, and then put it back out on the deck this year.  It's seeming to love the warmth and sunshine.  I love having it right by my door so that I can snag some whenever I want.  This year I'm also growing english thyme, sage, dill, parsley, and basil, but most are in the greenhouse at this time. 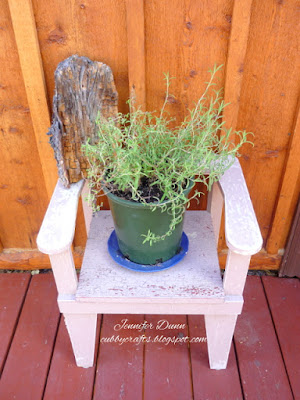 Thank you for taking the time to stop by and check out our gardening efforts this year!  I hope you have a beautiful day! 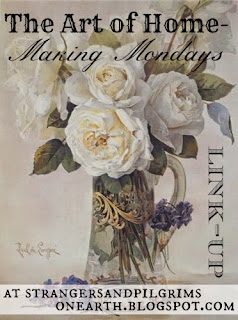 SaveSave
Posted by Jennifer at 11:45

it looks awesome when we go outside or when we look out the window. :) Cant wait till the flowers start really coming out. :)

Jennifer this is a truly wonderful post. Your greenhouse and hilled garden plot are looking like they will have a copious yield. I also hand water my flower beds and it has been so dry here.
My most magnificent hill in the garden amoungst all the veggies was a sea of Sweet William. I have chives, thyme, parks leans dill, the lavender didn't make it.

A usual all the work you do comes out amazing. Good to see all the plants are growing well.
Ulrika

Hello friend! Wow! Your garden looks amazing!! I have to say I've been so jealous of not only your beautiful views from every angle, but all that you get to enjoy with this!! :) Thanks for sharing the beauty!! HUGS

You are a busy lady with a very green thumb!! Thanks for sharing your beautiful garden and yard with us!

The Charm of Home said...

You have a lot of nice gardening going on here! I love the hilled up rows and the companion planting! I planted marigolds right in with my tomatoes in containers too.