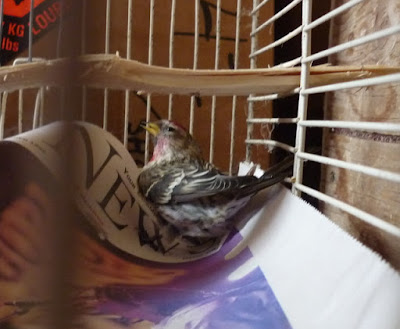 Hello! I'd like to introduce you to a little red pole we helped.  He flew into one of our windows and had trouble flying afterwards.  My daughter went and scooped him up and we brought him inside and put him in a little cage we have.  We put a piece of kindling through the bars for him to hop up on.

He was very scared and would hide down in the little corner most of the time at first.  We put some birdseed in there for him (the kind we feed them with outside) and waited.

Then he started to just hop around like crazy holding onto the bars and pecking trying to get out.  We didn't want him to hurt himself more so we put a towel overtop of the cage and he settled right down.

Before bed, after he was calm we put some water in for him and said goodnight. 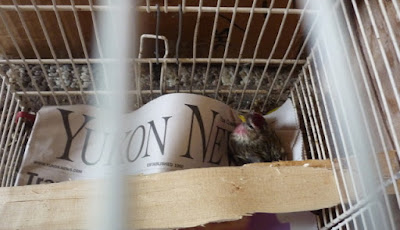 In the morning we took the towel back and let him have some light.  We had put him on a stool by the one window so he could see out.  He hoped around and ate and then he started to flap both wings (he wouldn't do that the night before) and then he would just hop up and stare out the window.  His friends had come back for the day (they fly away in the evening to a place I know not).  We decided to let him test his wings again and took him outside.  We opened the cage door and he hoped to it and flew away.  He still wasn't flying strong, but it wasn't too wobbly.  He is now back with his friends and we are happy he's ok! 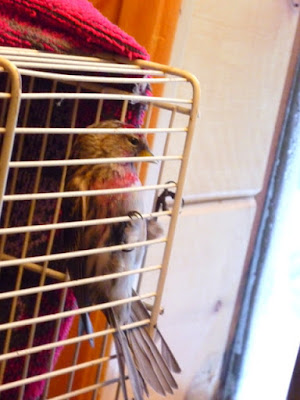 I love how this opportunity gave my kids an interest in finding out more about these little birds that grace our yard and sing to us. :)  I love how my children interact with the creatures in our environment.  How they treat them as special creations from the Lord Jesus and admire the amazing detail that each creature has been created with.

Genesis 1:21 "And God created great whales, and every living creature that moveth, which the waters brought forth abundantly, after their kind, and every winged fowl after his kind: and God saw that it was good."

Thanks for dropping by!  Praying you have a splendid day! 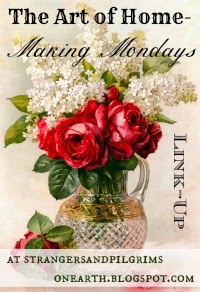 SaveSave
Posted by Jennifer at 11:31

Email ThisBlogThis!Share to TwitterShare to FacebookShare to Pinterest
Labels: Art of Homemaking, Nature

How awesome that you were able to bring that little birdie back to good health. It is pretty amazing how God created these precious birds. I love it that we can spark interests in our children by one simple act of kindness towards Gods creatures! Amazing!

I hope you have a delightful week my friend!

Hugs to you,
Amy